Mona is a high school cheerleader from Diamond City who also works as one of Wario's employees at WarioWare, Inc. Besides that, she also has numerous other jobs which keep her very busy, but despite this she still finds enough time to take care of her many pets, spend time with Wario and his friends and practice her Rock 'n' Roll skills. At the end of WarioWare, Inc.: Mega Microgame$!, Wario wouldn't pay her or any of his employees when he ran out with the money. Mona then shouted "You greedy punk!", and ran after him. The theme of her stages is often described as "Weird", owing to the lack of specific theme and oddness of most microgames. Although Mona does like Wario, she also has a crush on him due to his nose for treasure and money.

Mona is worried she'll be late for her job at a gelato store, so she rushes to the store on her motor scooter. Unfortunately, this attracts the attention of the police, who begin to chase her. However, Mona activates some "devices" that get the cops off her tail, the last of which is a monkey that throws banana peels. The Microgame Mix involves the crossfire screen the monkey uses to aim at the police cars. After the stage, Mona makes it to the store and punches in on time. The rest of the WarioWare characters gather at the gelato store once their stages are completed.

There's not much to say about Mona in MPG, apart from the fact she's a playable character in Multiplayer. Speaking of Multiplayer, Mona has her own stage in Multiplayer, called "Listen To The Doctor".

Instructions On "Listen To The Doctor"Edit

Basically, when the game is started, your characters will be sitting, waiting for the doctor to call you. Once you or someone else in your party is called, the Doctor will say a order such as "While admiring (someone in your party)..." or "While sitting like a girl..." And then a microgame will popup, and you have to do the said action the doctor said while playing the microgame. This has been considered hard for most players & some say the doctor is creepy for some younger viewers, but since it's Mona's stage, it's actually more strange than creepy.

Once the microgame is finished, if you Win it or Fail it, the doctor will show completeness or failure. He will then ask "Did that player listen to the doctor?" It turns back to everyone else. And a text that says "If so, clap!". To clap, you must press A. The claps represent the result you did on the microgame, or the order the doctor told you do to was completed. The person with the most claps & the most microgames completed for the following player wins.

A customer orders three Mona Specials from Mona Pizza. On her way to the customer's home, the crew of her neighboring rival pizzeria Pizza Dinosaur tries to catch up behind her, but Mona speeds up.

While the customer waits for their pizza to arrive they instead watch Sal Out sing Mona Pizza live on stage.

Pig has no sucess either. Chimps throws a banana peel on the road, causing the dinosaur to slip and fall. Mona successfully delivers the pizza to the customer.

In the intro to her stage, the top five singers are listed on a TV show.

Mona's song turns out to be on top. This catches the attention of Vanessa, a famous singer (the great pop queen) who was the number one hit previously. Infuriated, Vanessa sets out and chases Mona and her friends on the way to the Hawt House. Mona's friends retaliate, and try to shoot down the ship. This leads to the Microgame Mix, involving an aiming screen similar to the one in Mega Microgames. After the microgames are beaten, the ship is downed, and Mona makes to the Hawt House and performs. Soon, however, she realizes she has to deliver pizzas. When she heads out, Vanessa shows up disguised as her, but is instantly recognized as an imposter and the people get furious at her as she whines and complains. After that, Mona, her friends, and even Vanessa are seen jamming with the others.

Mona is shown as the lead of a cheerleader squad, in which all the cheerleaders are identical except for her. A football player, watching from the sidelines, develops a crush on her. Later, a football game is going on, and the football player tries to focus on the game. After the Microgame mix, the football player knocks over the rivaling team and makes a winning score. Later, he tries to confess his love to Mona, but she leaves quickly and another cheerleader walks in. She also appears in Young Cricket‘s stage, as she runs the restaurant.

In this DSiWare game, Mona runs one of the roller coasters. At the end of the stage, the player is shown in wacky photos involving captures of his/her poses during the microgames and added cartoon objects. (i.e. In one microgame where the player must try on a hat, he/she is shown afterwards wearing a hat in one of the photos.)

During her stage in DIY, Mona is an explorer looking for lost treasure (See the picture at the top of the page). She finds some ancient ruins and enters. During Breaktime, she advertises a treasure she found. When the screen is tapped, a "SOLD" sign will appear, and Mona will thank you for your purchase.

Mona's stage in Game & Wario is Shutter. Mona Holds a camera in a detective outfit.

In WarioWare Gold, Mona sees herself trying to find the perfect dress for a party she will be throwing later on

Mona changes clothes in every game (except Wario Ware Mega Party Game$ since it's a remake). In WarioWare: Touched!, after you get to the break in her Microgame Mix you can change her clothes by tapping her with the stylus. This also happens in Mega Microgames, when your press the "A" Button. 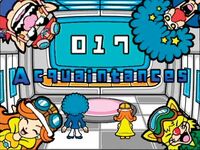 WarioWare, Inc.: Mega Party Game$!
(All For One)

Rhythm Heaven Megamix
(Ringside)
Add a photo to this gallery
Retrieved from "https://wario.fandom.com/wiki/Mona?oldid=11637"
Community content is available under CC-BY-SA unless otherwise noted.